Modern-day license plates for vehicles in the State of Chihuahua proudly proclaim, “El estado más grande,” or, in English, “The Largest State.”  The biggest state in Mexico contains vast hot deserts, rugged pine-covered mountains and to this day, much unexplored terrain.  It is also home to many legends.  Here are four.

The legendary general of the Mexican Revolution, Pancho Villa, once passed through the town of San Andrés, in the municipality of Riva Palacio, to recruit all able-bodied men to join his army and fight for the revolutionary cause. The telegraph operator in the town refused, and vocally so, claiming that he did not want to ride with lawless bandits.  Villa insisted, and the telegraph operator doubled down, hurling insults at the general.  Pancho Villa had no time to argue and wanted the telegraph man to serve as an example, so he gave the order to have him shot. Villa was quoted as saying, “We will shoot him so that he may rest in the cemetery for all eternity!” At the time of the execution, the dog owned by the unfortunate man fiercely put himself between his sentenced master and the members of the firing squad who were there to carry out the execution.  The dog was huge and was barking and snarling as if it had gone mad.  No one dared go near it.  General Villa was impressed by the ferocity of the dog, so instead of ordering the dog shot along with his owner, he ordered the dog chained up.  Perhaps it could make a good mascot for the troops, Pancho Villa thought.

Struggling and barking, the faithful canine strongly insisted on protecting the life of his master. Before the order of “Fire” was heard, the dog managed to break the chains that held him and ran fearlessly towards the telegraph operator.

The thunderous rifles sounded and behind them a disturbing howl, indicating that not only the telegraph operator had been shot down, but along with him, his faithful friend. Soon, the whistle of the railway was heard and Pancho Villa, like a perpetual wanderer, embarked with a fresh contingent of men leaving San Andrés behind.

From that day to now, on the dark nights of June, the chain and the howling of the dog can be heard moving throughout the town.  All who hear this are scared because bad luck is supposed to befall anyone who experiences these terrifying sounds.

On a weekend some years back, 5 young people were off on an adventure to Cumbres de Majalca National Park, some 55 miles northeast of Chihuahua City.  The mother of one of the boys on the trip cautioned them because she was familiar with the area and knew that many strange things happened around Majalca.  Young people, as they are, laughed off the woman’s warnings and loaded the car for an exciting weekend in the wilderness. On one of the back roads near the national park their car got a flat tire.  They pulled the car off to the side of the road to put on the spare.  One of the members of this group, Luis, wandered off a little and rested near a small rock outcrop. Between some of the stones he saw a glint of something. It looked like something metallic was behind the pile of rocks.  He called the others over to his location and started to remove the rocks.  The group beheld a large shiny black box about 5 feet long.  When they took the lid off the box, they were shocked at what they saw:  a mummified corpse full of jewels, with a large gold ring on the right hand.  The group was terrified, and all were scared to the point of feeling nauseous except for Luis, the one who stumbled upon this site initially.  Luis thought himself brave and decided to take the ring off the mummy’s hand.  He used too much force and tore the entire hand from the corpse of the mummy.  A reddish-green liquid spurt out and splashed on Luis. This scared the group even more. Luis then started to turn pale and had trouble breathing.

The road they were on was not well traveled, but they soon flagged down a woman in a small car for help.  There was only room in the car for one passenger, so they asked the woman if she could take Luis to a hospital in Chihuahua City while they finished up fixing their own car. Luis got into the car, and he felt relieved that he would soon have the medical attention he needed.  A few minutes into the ride, he noticed something unusual about the female driver:  She was missing a hand.  Luis was a curious fellow and tried to be as polite as possible when he asked the woman what happened to her hand.  The woman looked at Luis with a cold stare and yelled, “YOU took it from me!”  Later that day on highway 45, Luis’s body was found on the side of the road and the coroner’s office in Chihuahua City ruled that the cause of Luis’ death was heart attack.

In 1811, during the final years of Spain’s rule over Mexico, in what is now the town of Rosales, Chihuahua, there was a well-liked priest named Father José María.  The kind father involved himself in both the religious and civil affairs of the town, which is why he had many enemies. Don Tomás was one such person on the “enemies list.”  The man was a drunk and a lout and he was repeatedly reprimanded by Father José María for having an affair with a young woman.  To get back at the priest, Don Tomás accused him of conspiring against the Spanish Crown. Father José María did have a history of meddling in civic matters, so the accusation was not so far fetched.

The government dispatched to Rosales an investigator by the name of Francisco de la Cerna to conduct interviews with the townsfolk about the priest’s activities.  When the investigator arrived in town the people gathered in the parish so that he could more easily conduct the interviews to see if a conspiracy existed. The evening lasted until three in the morning, and since he had drunk too much wine and was extremely tired, the investigator could not return to where he was staying.  Francisco de la Cerna thus accepted the priest’s invitation to spend the night with him in the church’s quarters reserved for clergy and visiting dignitaries. The next morning, the investigations were to continue, but when the priest went to wake up the visitor, he found him dead.  Francisco de la Cerna had died peacefully in his sleep. Rumors swirled throughout the town and a group of those unfriendly to Father José María sent a letter to the governor, accusing the priest of murder. As the rumors intensified, most people in the town turned against the father, and church services even became hostile.  From the pulpit, the priest, without bearing his wrath any longer, proclaimed: “You ungrateful people! I curse you! Nor do I want the dust of your land to accompany me anymore! Nay the holy almighty God condemn you to fire!”

It took some months, but after proving his innocence, Father José María was transferred to another parish. He conducted a final mass in Rosales.  During this last mass he came down from the pulpit crying and asked in prayer for God’s mercy to save an impious people.

In 1940 the old church of Rosales was rebuilt, and under the floorboards of the church construction workers found a mass grave containing dozens of bodies seemingly buried at the same time.  Old timers in the town claimed that these were the victims of Father José María’s curse who had all died suddenly within a few days of the priest’s departure.

One of the most famous legends in the whole country of Mexico can be found in a small dress shop in Chihuahua City.  The shop’s name is La Popular, also known as La Casa de Pascualita.  In 1930 a mysterious mannequin appeared in the shop’s front window.  People started calling the mannequin Encarnación and it had supposedly been imported from Paris.  It was so lifelike that rumors began to circulate throughout the business district about the mannequin’s true origins.  Some people claimed that seeing the mannequin gave them chills and that there was something 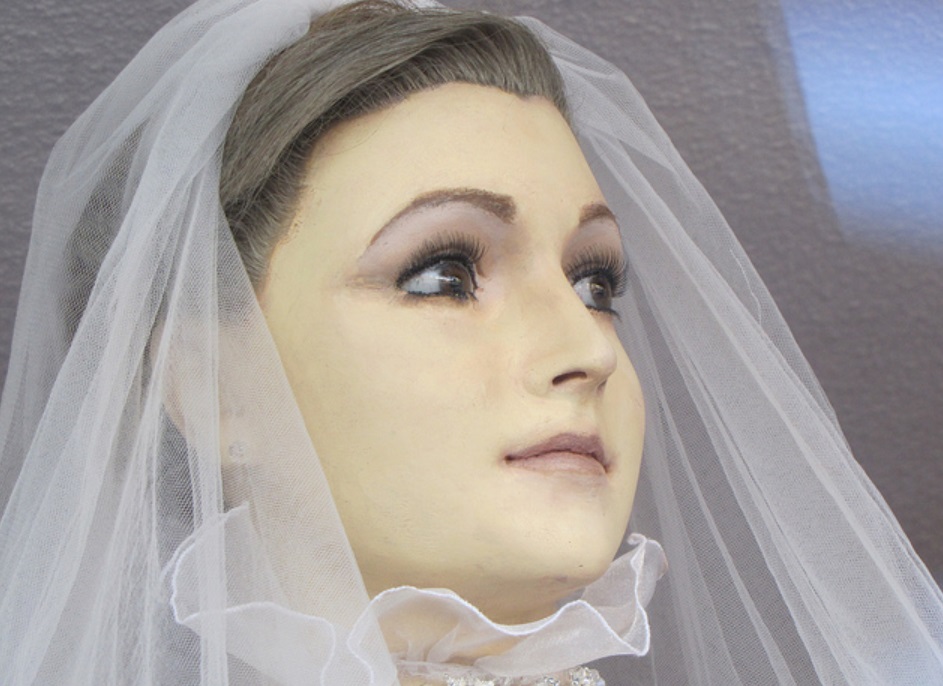 almost otherworldly about Encarnación.  Soon people began to come up with some very strange theories.  The appearance of the mannequin in the front window of La Popular happened only a few days after the death of the shop owner’s daughter who had died on her wedding day.  The mannequin had an eerie resemblance to the young woman, too, and its features were too lifelike.  Could this display window piece be the actual embalmed body of the owner’s daughter? Over the years, amateurs and professionals involved in the funeral trade have weighed in.  Many believe that the mannequin is a real work of art, especially for the 1930s, and that it is not the body of a perfectly embalmed human woman.  Others, though, point to the uncanny details on the mannequin that hint that it could be the body of a real person, like the cuticles receding on the fingernails over time, and certain aspects of discoloration on the figure.  It is very old, and those who do not believe it is an embalmed person, point to the fact that the face remains as it was in 1930.  Over time, the face would have slowly changed if it were once a real person.  There are more than a handful of rumors and stories connected to why the face exists intact.

One story involves a fortune teller and spell caster from India who was walking past the window of the Casa de Pascualita and was enamored with the mannequin.  After midnight, he broke into the shop, cast a spell on the mannequin and caused her to come to life.  Witnesses later claimed to see the man escorting the fully animated mannequin throughout town.  He would always return her to the shop at the end of the evening and cast a spell to freeze her back into place.  Rumors began to spread that the shop owner knew about and encouraged this practice, and further, that the mannequin was involved in late-night satanic rituals.  There was supposedly a lawsuit filed sometime in the 1950s which demanded that the owner of the shop turn over the mannequin to the authorities because of its role in the satanic rites.  Soon after the lawsuit the man from India tried to burn the mannequin.  He did much damage, but the face remained intact and flawless.  He returned to India but left the mannequin with another curse, that her eyes would follow those passersby who had evil in their hearts.  Today, the mannequin still stands in the shop window and remains the topic of one of Mexico’s most enigmatic and enduring legends.

For more legends from the great state of Chihuahua, follow this special Mexico Unexplained link:  https://mexicounexplained.com/lost-treasures-of-the-state-of-chihuahua/