Christopher Columbus, the Admiral of the Ocean Sea, was on his fourth voyage to the New World.  After a brief stop at Jamaica, Columbus arrived at Guanaja in the Bay Islands off the coast of the modern-day country of Honduras.  The day was July 30, 1502.  Columbus observed a large canoe with 25 rowers onboard laden with cargo.  This indicated to the Europeans that the indigenous people of Central America had the capability of traveling large distances and had established trade routes.  How far that large canoe was capable of traveling was anyone’s guess.

Classic Maya civilization ended some 500 years before Columbus’ voyages to the Americas.  Scholars have long agreed that the ancient Maya homeland was contained in an intense area located in what is now eastern Mexico and parts of the nations of Guatemala, Belize and Honduras.  People in ancient times did manage to get around, and the Maya were no exception.  Their trade contacts with faraway cultures such as Teotihuacan in central Mexico are well documented.  How far beyond these established civilizations did the Maya venture is up to much speculation and interest.  The modern state of Florida in the southeastern part of the United States draws particular attention.  There are some theories that suggest the ancient Maya crossed the Gulf of Mexico and established themselves in Florida.  We will look at possible evidence from three places:  ancient settlements near Lake Okeechobee, the Crystal River site on the Gulf Coast and on Key Largo in the Florida Keys. 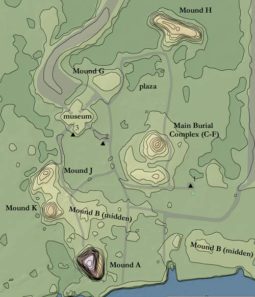 Archaeologists have uncovered and described two interconnected sites near Lake Okeechobee in southern Florida, the Fort Center site and the site known as Ortona Mounds.  Some researchers believe that the people inhabiting these locations controlled a vast trade network covering both coasts of Florida and stretching very far into the interior of the North American continent, possibly as far as the valley of the Ohio River.  Clay pipes found around Lake Okeechobee in Florida have their origins in the area of modern-day Ohio while feathers from birds native to Florida are found as far north as the Ohio River valley.  There is great speculation on where these organized traders who established themselves in south Florida originally came from.  Researchers have found evidence of corn being grown in this area sooner than in other parts of the United States.  This evidence seems to discount an overland sharing of the tradition of planting corn traveling up through Mexico, across Texas and the southeast and down into Florida.  The fact that corn cultivation started in southern Florida first – in the early centuries BC – implies a more direct connection to Mexico.  Another possible import to the area is a bird native to the Maya homeland and most of the rest of Mexico:  The northern crested caracara, a member of the falcon family.  These birds do not migrate.  Ornithologists long thought that this group of isolated Florida caracara was part of what is called a relict population, or a small cluster left behind from the change in the bird’s habitat after the last ice age.  Researchers looking into this bird’s current range in Florida now tend to believe that it was introduced by ancient Mexicans in the early years AD.  The northern crested caracara was a very important bird to the ancient peoples of Mexico.  Mexican ornithologist Rafael Martin del Campo has proposed that the northern crested caracara was most likely the bird depicted in the ancient manuscripts of the Aztecs and not a golden eagle, as is so often associated with the Aztec settlement legend.  Besides the early use of corn and the presence of a Mexican bird around Lake Okeechobee, the people in the area also built pyramidal mounds and used lime for many different things.   In Mound A at Fort Center shells were burned in large circular pits to create lime.  Lime was used as fertilizer for growing crops, for plaster in buildings and in processing corn.  The use of lime here is identical to its use in ancient Mexico and in the archaeological record in southern Florida the practices seemed to appear out of nowhere.  Some researchers cite a linguistic connection to tribes in the southeast and the ancient Maya.  When the English first arrived in Georgia and South Carolina in the 1600s they encountered the Hitchtli people, a group who were thought to have originally migrated to the area from Florida.  Were the Hitchltli descendants of the people who occupied the much older sites around Lake Okeechobee with connections to ancient Mexico?  Linguists have seen similarities between the Hitchtli language and languages of Mexico.  The Hitchtli word for “house,” for example, is chicki.  That is the same word for house in the Totonac language spoken on the gulf coast of Mexico just north of the Yucatán.  Another strange linguistic similarity is found by looking at the name of one of the most famous Maya archaeological sites – Chichén Itzá – and comparing it to the Hitchtli language of the southeastern US.  In the Maya Itzá dialect the word chichen means “mouth of the well.”  In Hitchiti, chi also means “mouth” and chahni means “well” thus chichahni would mean “mouth of the well.”  Perhaps and entire book could be written exploring linguistic connections between ancient Mexico and the tribes of the southeastern United States. At the Crystal River site up the Gulf Coast past the Tampa-St. Pete area there are other possible connections to the ancient Maya.  Archaeologists describe the ruins at Crystal River as being part of a trading outpost and its development began around 250 AD which put it contemporaneous with the beginnings of Classic Maya civilization.  On Roberts Island in Crystal River there exists a curious ancient structure:  a stepped pyramid made of mortar and seashells.  Not only is it unusual to find a pyramid at all in the continental US, but it is very strange to have one so similar to a stepped pyramid in the Mexican state of Tabasco.  The pyramid at the Isla de los Cerros site in Mexico was made of the same materials as the one in Florida and is exactly the same size.  As the Crystal River Site was most likely just an outpost, this shell pyramid was the extent of the complex architecture at the site.  Some researchers have compared iconography found on pottery at Crystal River with that of the ancient Maya.  Venus symbols from the ancient Maya look eerily similar to repeated patterns found on pottery from Crystal River.  Also, at Crystal River archaeologists discovered depictions of what has been called the “Diving Bird Deity.”  At multiple sites in the ancient Maya world archaeologists have found a similar image called the “Descending God” which is often shown dressed as a bird.  There is also an interesting linguistic connection here that ties the region to ancient Mexico.  According to the Chontal Maya of Mexico, their ancient homeland was called Acala.  When Spanish explorer Hernando de Soto visited the area east of Crystal River in the 1530s, he noted in his diary that the indigenous people of this part of Florida called their territory Ocale.  The modern-day city of Ocala, Florida gets its name from this long-forgotten Indian province.  De Soto also mentioned that the main city of this province of Ocale was called Uqueten.

Pyramid structures also once existed on the island of Key Largo but are no longer there.  In an obscure article published on September 1, 1985 in the South Florida Sun Sentinel the author describes the curious archaeological site on the island:

“Today it is little more than a growth-infested pile of coral rocks hidden away from U.S. (Highway) 1 by the jungle-like foliage of Key Largo — vandalized by would-be treasure hunters, desecrated by trespassing campers.  But hundreds of years before the Spanish first set eyes on the Florida Keys, the pile of rocks was part of a sacred Indian temple with causeways, ceremonial platform and ramps shaped like a giant crab. Built entirely of coral, it rose to 15 feet, had a flat surface on top and was 100 feet long by 50 feet wide. It faces a low hill like a miniature amphitheater and was probably a gathering center for hundreds of Pre-Columbian inhabitants who worshipped unknown gods.” The Smithsonian, under a Works Project Administration grant in the 1930s, was the first to formally investigate the Key Largo site.  The Smithsonian described a large central pyramid, several platform mounds and a series of low-lying walls, all made of rock and coral.  Beautiful stone walkways led to fresh-water wells and a large habitation area located at the part of the site facing the bay.  Stone ramps went up to the top of low-lying mound-like structures.  While the indigenous inhabitants of Florida at the time of European contact were described as being a somewhat nomadic hunting and fishing people who had no agriculture, these ruins indicate a more technologically advanced civilization.  Does this unusual amount of sophistication necessarily mean there is a connection between the Key Largo site and the ancient Maya?  Serious investigators in the late 1960s and early 1970s seemed to think so, including Charles LaCombe, a professor of archaeology at Florida International University, and a founder in 1971 of the Institute of Mayan Studies in Miami.  In that 1985 Sun-Times article, the professor is quoted as saying:

“There is no reason why they (the ancient Maya) could not have come to the Keys.  They were a maritime people and the only pre-Columbian people who could navigate.”

While similar ruins have long since been dismantled, their stones used for backfill or in modern landscaping projects, some structures still exist on nearby islands.  On Lignumvitae Key a 3-foot tall rock wall runs perfectly north-south for 1,000 feet with other smaller stretches of walls intersecting it at right angles.  Florida archaeologist Sean Sullivan wrote that these stone structures were most likely built by pre-European peoples to assist in navigation and that they were aligned in such a way that ancient seafaring people might have used them as directional devices.  Whatever the purpose of these structures, the settlements associated with them were built around 800 AD and abandoned no later than the year 1175.  The Key Largo ruin with its pyramid and complex architecture for the time was just getting started when the Maya world in Mexico was beginning to crumble.  Were the settlements in the islands in the Straits of Florida built by refugees fleeing a collapsing civilization?

The 1970s and 1980s saw much destruction of ancient Florida archaeology.  This was mostly due to a massive building boom and from grave robbers and artifact hunters plundering ruined sites.  While new discoveries are always being made in the field of archaeology, perhaps it’s too late to piece together even a vague history of pre-European Florida and its connection to ancient Mexico.

Kerr, James.  “The Lost Civilization of Key Largo.  Were there Mayans in the Florida Keys?”  South Florida Sun-Sentinel.  1 Sep 1985.