The 13th-largest state in Mexico, the state of Nuevo León in the country’s northeast is home to Mexico’s second largest metropolitan area. The state capital of Monterrey and its environs are home to almost 6 million people and that metropolitan area is considered Mexico’s heart of manufacturing and business.  Beyond Monterrey, Nuevo León contains much smaller populated areas and many vast empty spaces.  It is home to high mountains, prairies, and deserts.  Nuevo León is bordered by the Mexican states of Tamaulipas to the east, Coahuila to the west, and both Zacatecas and San Luis Potosí to the south.  To the north, it shares an international border with the American state of Texas north of Laredo.  Nuevo León is also home to many legends.  Here are 4.

A Spanish chronicler of the mid-1600s named Alonso de León liked to talk with indigenous people on his travels in order to learn more about their customs.  One day he was traveling with a local through an area somewhere between what is now Monterrey and the US/Mexico border.  He was told to cross the San Juan River where he would find a pool of water, a spring, that, according to his local contact, “does not flow, nor does it grow, nor decrease, nor can a bottom be found.” Also according to León’s guide, on the edge of the pool grew tall stalks of grain, which, although the Indians cut them back, grew back again rapidly and as if nothing was ever harvested.  This was indeed a magical place of abundance and the indigenous people who lived there were happy and wanted for nothing. When Alonso de León arrived at the sacred pond, he spoke to the elders in a nearby village.  The elders told him that centuries before a very powerful being visited them there, coming from the south.  In some versions of the story the visitor was like a god, and in some other versions he was a tall good-looking man with an air of nobility about him traveling with an entourage of a dozen people or so to cater to his needs.  This strange visitor would teach the locals many new skills and would bathe in the magical spring.  After one of the departures of this godlike being or noble man, another man came to the village who was ugly in appearance and had a mean disposition.  This ugly man would say that the more noble man or godlike being was a liar and that he was truly evil.  When the godlike being or noble man returned, he sensed that the villagers did not want to follow him or have anything to do with him because of the doubts that were sowed in their minds.  So, he left and never came back.  The villagers never saw the ugly man again, either. The Spanish chronicler associates the story with the tradition of Quetzalcóatl and believed that these visits may have been based somewhat on history that was jumbled over the centuries.  The noble visitor could have been a real Toltec or Aztec ruler, traveling with servants.  Alonso de León conjectured, on the other hand, that the so-called “ugly man” could been the explorer Cabeza de Vaca, or some other Spaniard who tried to convert the natives away from believing in the divinity of the mysterious godlike visitor from the south.  In any case, the magical spring has never been found and the indigenous people of the region have long since either been killed off or have assimilated into the wider Mestizo culture.  The sacred pond is now relegated to legend.

This brief legend takes place in a tiny town south of Monterrey called Gil de Leyva, now a suburb of a larger town called Montemorelos.  The former Misión de la Purificación which had been founded in 1715, was serving as a church for the small town just a few decades later.  In this church was a venerated image Jesus, a carved Cristo of Tlaxcalan origin, crafted by skilled indigenous hands sometime in the mid-1500s.  The pious inhabitants of Gil de Leyva and the surrounding countryside attributed numerous miracles to this beautiful wooden carving, and many made pilgrimages to the small church to give thanks. A few decades before Mexican independence, an unbelieving Spanish army captain came to the town and heard about the miracles attributed to the statue of Jesus in the modest church. The captain wanted to show the townsfolk that the venerated icon did not possess any power. Mounted on his horse, he entered the church, amid the astonishment and fear of the faithful, who were devoutly listening to mass, and lassoed the sacred image, pulling strongly on it with the intent of removing it from the chapel. Overwhelmed with terror, the captain felt the image pull back harder than he was pulling.  So, he then decided to make a superhuman effort to rip the Jesus off the altar.  He whipped his horse to pull harder and then his horse suddenly slipped. The incredulous captain was violently thrown to the ground and died immediately. This legend from Monterrey begins with a good intention:  The father of a young woman, affected by paralysis, decided to build for his daughter a mansion with a strange cylindrical design, whose rooms and floors would be joined by ramps so that his daughter’s wheelchair would not be deterred by the obstacles common to ordinary households. From the beginning the project was tinged with misfortune:  Two workers died during the initial building phase in unexplained accidents, construction seemed painfully slow, and the building was seen by locals as a strange and tacky Tower of Babel whose presence was clearly ominous.

One afternoon the young woman was taken to the house to observe the progress of the work. It was a little difficult for her to maneuver her bulky wheelchair amid the construction debris, and on the third floor her chair got stuck on something.  The woman rocked from side to side to get her wheelchair to move, but then when free of the minor obstruction she lost control of it.  The girl flew down one of the ramps, crashed through a window and died on impact. The father’s grief from the death of his daughter led him at first to drink and then to suicide.

The house was abandoned half-built and countless unfortunate events befell it over the years.  Since the builder’s suicide locals have reported more deaths of visitors from fatal accidents as well as suicide pacts that were carried out in its rooms.  Eyewitnesses have also claimed to have seen the ghost of an angry young woman in a wheelchair.  Passersby claim to hear strange noises coming from La Casa de los Tubos, like moans of anguish or screams of terror, especially at night.  No one dares to demolish this house because legend has it that anyone trying to do so will meet a horrible fate.  So, the cursed house still stands.

The elders of past centuries told that the tradition of the mesquite cross is not a thing of Christianity, but that it comes from farther back in time, long before the Spaniards arrived in the lands of the Altiplano and imposed their religion, which was unknown and foreign to the inhabitants of the desert, the Huachichiles. Although the conquerors saw everything that the natives did as something of the devil, the only thing they did accept was that they worshiped the mesquite; by having their arms outstretched as if they formed a cross, they interpreted it as something similar to the main symbol of the Christian religion. The truth be told, for the natives this natural cross figure represented a powerful spirit of nature manifested in a tree with a human appearance, with its body erect and its arms open.  Huachichiles would go to these specially-formed mesquite trees to ask to bring rains whenever their communities experienced a prolonged drought. 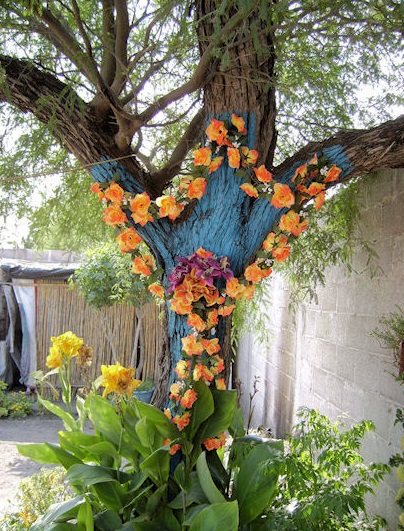 Due to the syncretism of beliefs, over time most of the Huachichil traditions were lost and the cult of the cross-shaped mesquite took a Catholic turn.  Even now, in the southern parts of the state of Nuevo León, any mesquite with such characteristics is celebrated on May 3, the day of the Holy Cross. However, when there is a drought, people bring these cross-shaped trees offerings because of a lingering deep belief that the tree will perform the miracle of bringing the much-needed rains.

In the small dusty town of Mier y Noriega, near the Nuevo León border with Tamaulipas and San Luis Potosí, there is a story of a humble man who was unaware of this tradition.  He was in the mountains looking for firewood and when he found a mesquite tree in the shape of a cross, he decided to cut it down. He returned to his house with a pile of firewood and the cross-shaped trunk of the mesquite which he thought would be a wonderful centerpiece for his home altar. When the neighbors found out, they asked him to do something to make amends, but he said he didn’t believe in such things. On the third day after the man’s return from the mountains, a great storm visited the area, the likes of which the locals had never experienced before.  During the storm, a tornado came out of the sky and devastated the town, causing the death of all the members of this man’s family. The man, foreseeing that the locals would retaliate against him, had managed to flee from the community and his whereabouts were never known. In the meantime, the people took the cross, organized a pilgrimage to return it to its original site, and buried it. The rain continued for several more days, until the fury of the mighty spirit subsided. But the story does not end here: they say that a robust mesquite also in the shape of a cross grew right there, which is still standing, and people venerate it to this day.