The date was August 9, 2020.  The Bishop of Campeche, José Francisco González González presided over the annual taking down or descent of one of the region’s most venerated religious objects, the Cristo Negro de San Román.  Every year at noon on August 9th for the past 455 years, 11 faithful people would take down the black statue of Christ from its place above the altar and move it to the center of the church for public veneration.  This was done to commemorate the martyrdom of the statue’s patron, Saint Romanus, a Roman soldier in the legion of Emperor Valerian who converted to Christianity and was beheaded on August 9th in the year 258. The solemn ceremony in the Campeche church taking place in the year 2020 was unlike any other in the previous 454 years.  The life-size black Christ was put in an enclosure, and for the first time in its history the faithful were not allowed to touch it or kiss it, as in other years.  Ushers in surgical masks shepherded pilgrims and the curious through a sanitization tent outside where people were asked to wash and disinfect their hands.  The bishop, the statue’s 11 chosen attendants and everyone else in attendance wore masks and tried – albeit unsuccessfully – to adhere to social distancing protocols. Believers had to be satisfied with being able to be in close proximity to the crucifix only.  The ceremony went on, however, and even with hundreds of visitors that day, no one who attended came down with COVID 19.  Was this yet another miracle, in centuries of miracles, to be attributed to the Black Christ of San Román?

The story of the Black Christ begins in the 1560s.  The city of Campeche was founded by the Spanish who built the city at the site of a Maya town called Can Pech or Akh’iin Pech in the year 1540.  In the 1550s the Spanish brought a group of Tlaxcalans from central Mexico to settle a little to the west of the main square of the city of Campeche.  Their barrio was called Naborios.  The name of the settlement was telling.  A naborio in colonial New Spain was a free indigenous person.  In the early decades of the Spanish colonization of Mexico, many natives were either slaves or worked in a sort of indentured servitude.  A naborio was neither slave nor indentured servant.  For their help given to the Spanish in the overthrow of the Aztec Empire, the Tlaxcalan people were afforded many privileges in colonial society.  Unlike most other indigenous peoples, they could ride horses, possess firearms and most of them were naborio, or free.  This little Tlaxcalan colony, hundreds of miles from home, was mostly agricultural.  The Tlaxcalans grew bountiful crops in the Campechean soil.  By 1563, though, this naborio community suffered a calamity that spread throughout the Yucatán and surrounding regions.  Swarms of locusts of biblical proportions destroyed everything imaginable.  The local religious authorities reasoned that the community of Naborios was lacking proper religious protection.  The priests and friars in Campeche built a small chapel that was no more than a shack in the middle of the Tlaxcalan community.  They called this little house of worship La Iglesia de San Román Mártir and later changed the name of the settlement from Naborios to San Román.  The small church was lacking an image, so in 1565 the local priest commissioned a merchant by the name of Juan Cano de Coca Gaitán to sail to the port of Veracruz, two days by sea from Campeche, to buy a Christ figure.  During his next regular run to Veracruz, Gaitán met with a religious objects merchant and purchased a beautiful large crucifix with a nearly life-size Christ carved out of black ebony wood.  The crucifix came from Civitavecchia, the Italian port closest to Rome, and was carved by an unknown Italian artist.  Although the figure of Jesus was black, he had European and not African facial features.  The merchant Juan Cano de Coca Gaitán loaded the Black Christ on his ship with other cargo purchased in Veracruz and set sail.  Within hours his ship encountered a terrible storm, a hurricane, that tore apart some of the masts and almost sank the ship.  According to the sailors serving in Gaitán’s crew, a mysterious dark-skinned man appeared on deck in the midst of the worst part of the storm and helped the sailors square away the ship. This mysterious man was reported as having a very kind face and was said to have been extraordinarily strong.  The sailors would say later that the ship would not have survived without the help of this man who was not part of the crew.  Something else happened connected to this sea voyage that was very curious.  Despite the storm, Gaitán’s ship arrived back to Campeche in less than 24 hours, not the two days it normally took. Some modern-day historians and armchair researchers claim that the priests requested a dark Christ instead of a light-skinned one to appeal to the Tlaxcalans’ racial sensitivities.  The priests wanted the natives to identify more with the image, these researchers say, and would be more apt to worship a Christ that looked more like them.  The Tlaxcalans had already converted to Christianity decades before and were devout enough not to need any sort of extra “push” to get them to accept the imported religion.  There was no apparent reason why Gaitán purchased that specific Cristo while in Veracruz. There is evidence that the darker Christs were somewhat fashionable in New Spain at the time and prized because they were unusual and uncommon. In the early 1500s there were four other churches in the Yucatán that had black Christs in them.  All the churches containing this type of Cristo were destroyed during the Caste Wars of the mid-1800s, except for the San Román church in Campeche which was located away from the bulk of the fighting.  The “Dark Skin to Appeal to the Natives Theory” seems to be just 21st Century academic thinking applied to a situation that took place centuries ago.  For more information about another Cristo Negro in Mexico, please see Mexico Unexplained Episode Number 178 titled, “The Black Christ of Otatitlán.”  https://mexicounexplained.com//the-black-christ-of-otatitlan/

Over the hundreds of years of its existence, there are many stories and miracles associated with The Black Christ of San Román.  In the 1600s and 1700s the city of Campeche was often besieged by pirates.  For more information about Campeche’s pirate past please see Mexico Unexplained Episode Number 93.  In one story involving the Cristo, a group of English or Dutch pirates attacked the city and upon hearing of the famous crucifix, a band of buccaneers tried to loot the Church of San Román and make off with the famous Black Christ.  When a pirate approached the altar, the crucifix began glowing and let out an electrical charge that “zapped” the pirates.  Needless to say, they scurried away, and the Cristo remained safe and sound in the humble church.  Perhaps related to the story of the mysterious dark-skinned man that helped the merchant ship during the hurricane, many people around Campeche for hundreds of years have seen a dark-skinned helper whom they believe is the Cristo come to life, wandering about the city making miracles happen.  It’s important to note this is not the first reported incident in Latin America of a religious figure animating itself and being seen to intercede in the human world.  The Church at San Román, like so many other pilgrimage sites throughout Mexico is full of offerings made to the Black Christ for prayers answered or miracles received.  These are in the form of candles, handwritten letters, devotional or personal objects, or typical small ex voto paintings illustrating miraculous events or healings.  During the annual August 9th “Taking Down” ceremony involving this crucifix, bouquets of flowers are passed over the body of the Black Christ.  The faithful believe that anyone who touches one of these holy flowers will be cured of any disease and their homes will be protected. 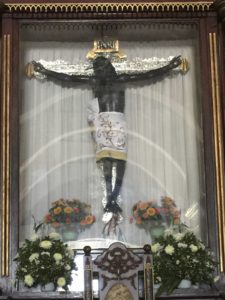 The Descent of the Cristo Negro on August 9th marks the beginning of the Fiestas de San Román.  The Black Christ is not only seen as the protector of the city of Campeche but he is also the patron saint of the entire Mexican state of Campeche.  The formal fiestas intensify from September 14th to September 28th.  In addition to traditional religious processions and special masses, the fiestas include rodeos, agricultural exhibitions, beauty contests, dance competitions, boxing matches, concerts, craft fairs, fireworks displays, and many celebrations in private homes from low-key to extravagant.  The fiestas attract people from around Mexico and it is a time for locals living away to come back home.  During the fiestas, devotees make the pilgrimage to the crowded Church of San Román sometimes with the last few yards done on their knees.  The church itself is not elaborate. It has one low bell tower and a whitewashed exterior with no ornamentation. Over the centuries the Black Christ has been perfectly preserved with no cracks or bore holes from insects.  Some may consider this one of the statue’s biggest miracles, surviving the centuries intact.  In its 455 years it has endured a shipwreck, pirate attacks, human handling and the march of time. There is no doubt the Black Christ of San Román will be around for many years to come.