On the January 26, 2021 episode of one of Mexico’s most watched YouTube paranormal shows called Insólita Experiencia or “Unusual Experience,” in English, host Yohanan Díaz Vargas interviewed notable Mexican UFO experiencer Víctor Ramírez.  Ramírez spoke of his encounters with otherworldly phenomenon dating back to 1986 when he came into contact with glowing orbs and unexplained lights in and around Mexico City.  Halfway through the interview, Ramírez told the host the story of an incident that happened in the 1990s in a wilderness area southwest of Mexico City called Cerro de Ajusco.  While he was hiking in the pine forests of the mountains with friends, Ramírez became separated from them and it became dark.  Overhead a square-shaped white-colored object appeared, hovering and making no noise.  Eager to reunite with his compadres, he was making his way through a ravine when he stumbled and dropped his lantern.  The light went out for a few seconds and when Ramírez looked up, he saw something which chilled him to the core.  Standing about 20 feet from him was a creature. It appeared to be a Grey, a typical alien reported in thousands of encounters around the world – short, big head, skinny body, almond shaped eyes, no mouth, spindly arms and legs – but this creature was completely white.  Their eyes locked and then the creature took off into the woods.  Ramírez mentioned that it fled faster than any animal and he never saw the creature again, even though he has returned to the area many times.  In this interview the host and guest spoke briefly about the Cerro de Ajusco being a “hotspot” of sorts for paranormal activity.  Víctor Ramírez even briefly mentioned Carlos Díaz who had many alleged encounters with extraterrestrials in the area.  The case of Carlos Díaz is one of the most famous UFO contact stories in all of Mexico.

Before we get into the case, let’s examine the setting, the Cerro de Ajusco.  The mountain is an old volcanic dome and is part of a small mountain chain called the Sierra de Ajusco-Chichinauhtzin.  Ajusco is located in the Distrito Federal of greater Mexico City – Mexico’s national federal district – and takes up about half the total area of the district.  Many find it amazing that such an unspoiled wilderness of pine, oak and fir forests could be so close to one of the world’s largest cities.  The area has been a special place since time immemorial.   The name “Ajusco” derives from an old Nahua dialect and originally meant “forest of waters” or some linguists believe, “where the waters derive.” The mountain has many springs, and those springs and other small streams form the headwaters of a few major Mexican rivers.  The first people believed to have lived on or around Ajusco were the Tepaneca.  When the Spanish arrived in the area, they found ruins with artifacts on the top of Ajusco and a small pyramid near its base.  A curious artifact found on the mountain, a large ancient lidded box made out of basalt, is nicknamed “El Cuartillo,” and is now housed at the Santo Tomás Ajusco Church.  Archaeologists believe this stone box is a tepetlacalli, a type of stone chest used by priests and nobles throughout ancient Mexico.  Although it has been compared to the famous artifact in the “Indiana Jones” movies, this is no Ark of the Covenant, although it is very mysterious.  The Ajusco wilderness is home to many wild animals. Among them is the very rare teporingo, known as the zatuche to the Aztecs, a bunny rabbit as small as a mouse. The Carlos Díaz case began at Ajusco on a January morning in 1981.  Díaz was a newspaper photographer and he was meeting a reporter at a parking lot at an overlook on Ajusco to work on a story.  Before the reporter arrived, Díaz noticed an orange glow coming from the valley below and assumed it was a forest fire.  The light grew more intense, though, and soon the source revealed itself when a large, orange-colored UFO appeared in front of his car.  Being a good photographer, Díaz grabbed a camera and started taking pictures of the strange craft.  As the object got closer, his car began to shake. Díaz got out of the car and took a few more photographs before the UFO shot up into the sky in a vertical trajectory. Díaz told very few people but got the photos developed.  He knew that others had reported strange lights in the skies over Ajusco for many years and because he hoped to get more photos, Díaz kept returning to the same parking lot for many weeks.  After seeing nothing, he almost gave up until his second encounter finally happened on March 23, 1981.

Hiking in the woods near the parking lot, Díaz spotted a UFO emitting an orange glow hovering over a small clearing.  The photographer positioned himself behind a small rock outcrop to observe without drawing attention to himself.  In a later interview he would describe the craft as being dome shaped with a smooth ring in its center.  The outside was covered in several half-spheres, each about 3 feet in diameter.  Although Díaz thought he was alone, he felt a hand reach out and grab his shoulder from behind. He immediately 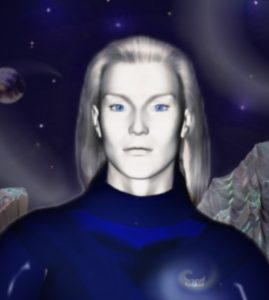 fainted and when he woke up it was dark and the mysterious craft had vanished.  Díaz noticed that although the surrounding forest was wet from a rainstorm, his clothes were not even slightly damp.  He returned to the parking lot and his car was not the only one in the lot.  From the car parked in front of his a humanoid emerged.  Díaz’ description of the entity would classify the being as a “Nordic” in UFO lore; he was taller than the average human and very blond with pale skin and bright blue eyes.  The being told Díaz that if he wanted to know more about what had happened to him, he needed to return at noon the next day to the same forest clearing where he saw the UFO.  Díaz returned as instructed and approached the blond being in the clearing who was sitting peacefully in the grass.  The Nordic explained that he was the one who grabbed Díaz by the shoulder the day before and that he had taken him aboard the glowing orange craft.  The blond extraterrestrial explained to the man that he would slowly recover his memories of the event over time and not to be alarmed.  He also told Díaz that this would be the first of many visits.

As the blond being had foretold, Díaz’ memory of the event slowly came back to him, bit by bit, over the course of the next few months.  Díaz remembered the craft hovering over him and walking towards it to touch it.  His hand went through it and his body seemed to merge with its yellow light.  The next thing he remembers is seeing the craft parked on a platform in the middle of a cave.  Here are Díaz’ own words from an interview some ten years later:

“It was full of stalagmites, some of which were carved into what appeared to be Mayan sculptures. I saw many people in the cave, some of whom waved to me and, in a state of shock, I waved back.”

He then went to a smaller cave and in that cave were smaller egg-shaped orbs of light.  Díaz was invited to step into one and when he did he felt like he was back in the forest but he really wasn’t.  He experienced all the sensations of being there but he never left the cave.  The Nordic who originally met him in the clearing explained to Díaz that these were vessels to explore different places remotely and they also served as sensory encyclopedias to store information on different locations.  After his experience with the orbs, Díaz returned to the larger cave, boarded the large orange craft and returned to the clearing in the forest.  According to Díaz, this was the first of dozens of encounters over as many years with the blond beings and their exotic technologies and crafts.  He would use the orbs in the cave many times to experience many different earth environments from the arctic wilderness to African jungles. Díaz kept most of this to himself for almost 10 years until the story caught the attention of Jaime Maussan, the grandfather of Mexican UFO research.  What impressed Maussan the most were Díaz’ photographs.  The objects depicted in the pictures were very unusual with beautiful mixes of yellow and orange colors.  This soon became its own separate category of UFOs now known as “Plasma crafts.”  Skeptics countered that since Díaz was a professional photographer with his own darkroom in his home that he could have doctored the photographs like an expert and was familiar with all the tricks of light to use to create a convincing hoax.  Maussan took the photos to imaging experts to have them authenticated or at least explained.  One of these experts was Dr. Victor Quesada, a professor at the Polytechnical Institute of the University of Mexico. Quesada stated:

“We were shocked to discover that the spectrum of light from the object was unlike anything we have ever seen.  It broke all previous parameters and didn’t match anything in our files. The light was extraordinarily intense. There was no evidence of superimposition or a hoax. We estimated the object to be around 30 to 50 meters in diameter.”

UFO researcher Jaime Maussan then took the photos to Dr. Robert Nathan of NASA’s Jet Propulsion Laboratory, a famous UFO skeptic and evidence debunker. Nathan could find nothing anomalous with the photos and could not see where they were faked.

The Carlos Díaz case also caught the attention of Dr. John Mack, professor of psychiatry at the Harvard Medical School.  Mack has worked with many UFO abductees and is convinced that Carlos Díaz is the real deal.  Mack wrote this about Díaz in his book, Passport to the Cosmos:

“Out of all the experiencers I have worked with, it is Carlos Diaz who seems to have developed the richest understanding of the interconnected web of nature. Diaz’s experience of connecting with living creatures is so intense that he seems literally to become the thing he is describing.”

Díaz believes he was chosen to be a messenger from the extraterrestrials to warn humans about the destruction of the natural world. He claims that the beings he has been meeting with have been observing our civilization for thousands of years and wish us to take a more active role in preserving our planet.  As part of this extraterrestrial observation, many of the so-called “Nordics” have been living among humans for untold generations and have even intermarried with them. These people are here not only to observe us but to warn us, Díaz claims, because their own past was similar to the earth’s current perilous situation.

Skeptics of the Carlos Díaz case are quick to point out that Díaz never mentions where these visitors are coming from and even after repeated contacts with them has yet to provide a single photo of one of these interesting-looking blond beings.  In the early 2000s a UFO debunker visited Díaz’ home town of Tepoztlan in the Mexican state of Morelos just across the border from Ajusco and found something interesting in a local mercado.  Apparently, a local glassblower has been making lamps for many years out of yellow and orange colored glass blended together that look remarkably similar to Díaz’ plasma UFOs when lit up.  Could the photographer have used these strange lamps to stage pictures of fake extraterrestrial craft to serve as the cornerstone for his stories?  If so, to what end?  Why would Díaz spend so much time and effort across decades to develop and maintain such an elaborate ruse?  Is the Carlos Díaz Case real or fake?  You decide.