The year was 1531.  A young Franciscan friar named Antonio de Segovia arrived in the area just west of the modern Mexican city of Guadalajara.  The country was recently christened Nueva Galicia by the Spanish who had formally conquered it the year before under the leadership of Nuño de Guzmán.  At the time of the Spanish arrival, the region was called Tonallan tlahtocayotl, in English, “The Kingdom of the East,” and was ruled by the powerful indigenous queen called Cihualpilli Tzapotzinco, whose name loosely translates to “the sweet fruit of the zapote tree,” in English.  Queen Cihualpilli lorded over 12 tributary states and because of the recent conquest of the Aztec Empire to their immediate east, the nobles of her dominions looked to the queen for help in staving off a similar catastrophe that had befallen their stronger and more sophisticated Aztec enemies.  Cihualpilli ordered her vassal states to submit to the Spanish and then after their surrender they would work out a peaceable solution of coexistence.   Half the leaders of the queen’s tributary states did not agree with her plan and vowed to fight the European invaders.  Those who agreed with the queen’s plans of peace sent delegates to meet the Spanish attack force just outside the Tonallan Kingdom.  It took only a matter of months for the conquistadors to subjugate the vassal states of Tonallan that were part of the resistance.  To further along the peace process, the great queen herself was one of the first indigenous people in the area to convert to Christianity to serve as an example to her subjects.  Her name at baptism was Juana Bautista and after things settled down she remained the figurehead ruler of Tonallan. The 40-year-old Fransciscan Antonio de Segovia did not arrive to the lands of Queen Cihualpilli unprepared.  He started his journey in the New World in the Yucatán arriving with the “second wave” of Spanish conquerors in 1525.  In the 5 years between his landing in Mexico and his arrival in the Guadalajara area, Segovia learned several indigenous languages and absorbed everything he could about the native cultures of Mexico so as to be a more effective evangelizer.  He made his way to central Mexico in 1529 and ended up in Pátzcuaro in the modern Mexican state of Michoacán at the time of the Nuño de Guzmán invasion of Cihualpilli’s kingdom.  As he was ordered to end up in this kingdom, he thought it best to arrive with a small statue of the Virgin Mary as the Immaculate Conception.  The Franciscan had heard that the indigenous people of this new area had worshipped the child goddess Teopintzintl and that a shrine existed in the town of Zapopan in the Tonallan Kingdom’s vassal state of Atemajac where pilgrims came to give offerings of partridges and rabbits.  With this small statue of the Virgin worn around his neck, Segovia thought he would best introduce Christianity to the natives by using an image that was somewhat similar to the goddess they had been worshipping for centuries.

The modern-day statue of the Virgin of Zapopan enshrined and crowned in the Basilica of Zapopan looks nothing like the statue that once hung around the neck of the Franciscan Friar, although the body we can barely see through all the subsequent embellishments is the same Virgin Segovia brought to the area in 1531.  The original doll-like image has survived remarkably well over the 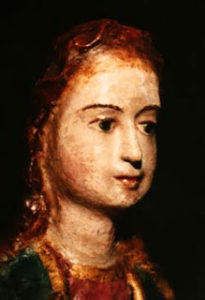 centuries due to the materials used in its crafting.  The statue was made by Purépecha Indians in Pátzcuaro using traditional methods.  First, a skeleton was constructed out of sugar canes and cornstalks.  Then, a special paste or dough called tatzingueni was applied to flesh out the figure.  This tatzingueni was made of corn stalk pulp and the juice of a local orchid which gave the paste a latex quality and would prevent the finished product from rotting or spoiling.  The indigenous craftsmanship, which has since been studied by scientists, has lasted almost 5 centuries.

Segovia arrived in Nueva Galicia as a simple minister, traveling without shoes – discalced, in Roman Catholic Terms – and with the Virgin Mary statue around his neck.  Many indigenous people who encountered Segovia claimed to see rays of light emanating from the small statue and word spread throughout Nueva Galicia of the Virgin’s mysterious powers.  The Franciscan converted thousands of Indians as a result.  Things seemed to be going well for the Spanish throughout most of the 1530s until many of the Tonallan nobles started to complain about colonial abuses of power.  The peace brokered by Queen Cihualpilli ended in a full out rebellion of several coordinated indigenous groups called the Mixton War in 1541.  By the end of the year the Spanish gained complete control over the area again and this time held on to it.  The area around Zapopan had been depopulated because of the fighting and on December 8 of 1541 the new town of Zapopan was founded by the Spanish who settled it mostly by bringing in natives from other regions.  As a gift for accepting the Spanish peace agreements, Antonio de Segovia gave his statue of the Virgin to the people of Zapopan who took care of it and built a small adobe shrine to it, much like the one they used to have to honor the child-goddess Teopintzintl.  It was at this time when the statue got its first title, La Pacificadora, or “she who makes peace.” The story doesn’t end here; the statue’s importance grew with time and the Virgin of Zapopan is now one of the main pilgrimage sites in all of Mexico.  Many events and miracles have led up to this. Since the late 1600s the city of Guadalajara had suffered more than its share of calamities.  Great lightning storms and epidemics of smallpox and measles swept through the city regularly.  In 1721, the city was attacked by a mysterious and deadly plague that decimate the population and it was at this time that the bishop of Guadalajara ordered the Virgin of Zapopan to leave its shrine and visit each neighborhood of the city to try to help end the plague.  In 1655 a previous Bishop of Guadalajara had given the Virgin the title of “La Milagrosa”, or “The Miracle-Worker” because of the many miracles attributed to the devotion to the statue and by the early 1700s the Virgin of Zapopan had been considered a powerful intercessor.  So, in 1721 on order of the church leaders the statue was carried throughout the various colonias of Guadalajara and the plague miraculously ended.  That was not to be the last tour of the statue.  After the caretaker of the church of San Juan de Dios was struck by lightning and the priest administering his last rites was also killed by a lightning bolt, the ecclesiastical authorities agreed that it would be best to make the Virgin of Zapopan a traveling statue.  In 1734 the bishop of Guadalajara Nicolás Carlos Gómez de Cervantes met with local governmental officials to have the Virgin of Zapopan declared “The Patroness and Advocate of the City.”  By November 14th of 1734, she was given formal title of “Patroness and Protector of Lightning, Storms and Epidemics of this Most Noble City and its Inhabitants.”  The next year, the Virgin was tasked with traveling throughout the neighborhoods of Guadalajara and the towns of Nueva Galicia from June until October, a ritual that has continued to the modern day.  You can even go online to track the Virgin and follow her various stops and events connected with her visits.  It has only been in recent times that a special exact replica statue called “La Virgen Peregrina,” or, in English, “The Pilgrim Virgin,” has taken the place of the real statue and has traveled the familiar summer route throughout the country.  The real statue is safe and sound under glass in the main niche in the Basilica.  The annual return of the traveling Virgin to Zapopan attracts an estimated one million people along the route home. During the Mexican War of Independence in the early part of the 19th Century, the Virgin of Zapopan was given military rank and yet another title, “La Generala,” or “The General.”  It was then when the statue was given a sword and a general’s staff to signify its role in protecting the members of the military.  The accoutrements and the clothing added to the Virgin increased with time and its importance continued to grow.  For quite some time the statue was completely veiled as there was fear that exposure to light would somehow decompose the figure.  Because the caretakers realized the durability of the craftsmanship of the piece, she has since spent her time unveiled and clothed in a gold-embroidered dress.  In 1919 with the visit of the Pope, she was given a gold crown adorned with rubies and pearls, and a small platform of solid silver, weighing 55 kilos.  Under her hands is a reliquary of gold and precious stones, with a gold image of the Baby Jesus in the center.  Because the Virgin of Zapopan was given the title of “Queen of Jalisco” in 1921, she holds a gold scepter adorned with pearls, diamonds and rubies and a golden staff.  She was also given the keys to Guadalajara at this time.  Somewhere along the line, the statue was given a small suitcase of gold, which remains beside her in the niche at the basilica.  Because of this suitcase, she has also been declared “Patron Saint of Travel Agents.”  The simple crescent moon at her feet that was originally made of the tatzingueni paste has been since covered in gold.  Over the years, the statue has also acquired curly brown hair. As the statue became more embellished and more important to the Mexicans over time, the structure housing it expanded in area and complexity.  What was essentially once a small adobe hut catering to locals has turned into an impressive basilica that is a major destination for the faithful throughout the Catholic World.  Construction of the larger abbey and basilica began in 1689, and as a result, the building is a prime example of Spanish colonial baroque architecture.  As the Virgin garnered more titles and more accessories, the basilica became more ornate and complex as well.  The current basilica has meditation gardens, an Italian marble altar, statues carved of cypress wood and many interesting architectural features of various orders and styles.  For believers and non-believers alike, the Basilica of Our Lady of Zapopan is a definite feast for the eyes.

In October of 2015 massive flooding hit the city of Guadalajara as a result of Hurricane Patricia.  As believers are quick to note, this natural disaster happened immediately after the Virgin’s processional period ended and there were no deaths from the storm.  The population had ample time to pray for celestial help as they were told a week before to expect the worst storm in the history of Mexico.  Perhaps the powers of the many-titled Virgin who has gained the reverence of millions over the centuries played an important role in mitigating a catastrophe, or perhaps the people of central Mexico just got lucky.  We may never know for sure.

Mostly from articles found at http://peregrinozapopano.blogspot.com (in Spanish)

2 thoughts on “The Virgin of Zapopan”