Rising some 7,800 feet above sea level in the southern part of the Mexican state of Guanajuato, Cerro Culiacán is a volcanic mountain that looks like a pyramid.  Covered in a thick oak forest, the mountain is popular as a natural getaway.  Many campers and others engaged in outdoor recreation visit Cerro Culiacán.  It was only in 1954 that a road went all the way to the top of the mountain which is now home to cel phone and radio towers that serve most of the sparsely populated southern part of Guanajuato State.  Some locals use an indigenous name to describe the mountain:  Teoculhuacan Chicomoxtoc Aztlán.  Many believe that Cerro Culiacán is the mythical origin of the Aztecs discussed in Mexico Unexplained episode number 18 https://mexicounexplained.com/journey-aztlan-mythical-homeland-aztecs/ because the many volcanic tubes coming out of the heart of the mountain could be the caves from which the ancient Aztecs emerged according to legend and oral histories.  Aztec origin stories aside, the mountain is a very mysterious place, home to strange anomalies, legends and assorted paranormal occurrences.

An examination of this mysterious mountain begins with a small archaeological site located immediately to the northeast of Cerro Culiacán.  It appears to be aligned with the mountain with a small pyramid approximating the shape of the cerro.  The site is not open to tourists, and it is off limits to all visitors.  There have only been preliminary investigations which have uncovered a small public plaza and a moderately-sized rounded building believed to have been dedicated to the wind god Ehecatl.  The site has been dated to 500 AD which puts it in the Classic era of Mesoamerican archaeology, around the time that Teotihuacán was the dominant power in central Mexico.  Archaeologists are baffled as to who built this small site.  It is located far from any of the major urban centers of ancient Mexico and is in what was considered to be the territory of the Chichimeca at the time it was constructed.  “Chichimeca” was a term to describe loosely the nomadic, warlike people who lived in what is now northern Mexico.  For more information about these people, please see Mexico Unexplained episode number 142 titled “Chichimeca: Warriors of the North”  https://mexicounexplained.com/chichimeca-warriors-of-the-north/ So, the ruins near Cerro Culiacán pose an interesting mystery because they are seemingly out of place for their time period and no one knows who built them or for what purpose. 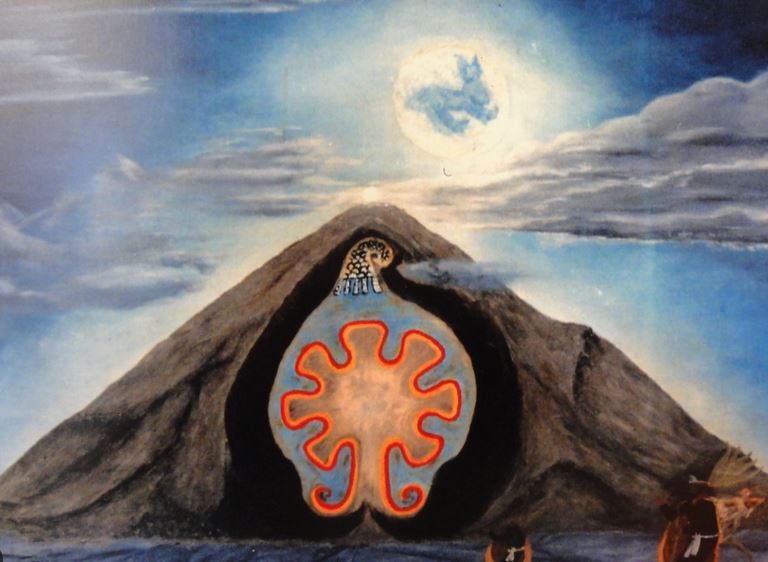 As mentioned previously, many modern researchers believe that Cerro Culiacán is connected to the mythical Aztlán, and is the location of the seven sacred caves from which the ancestors of the Aztecs emerged.  Some early accounts of the Aztec origin story were written down by Spaniards taken from oral histories in the decades after the fall of the Aztec Empire.  According to these accounts, Aztlán was located 150 leagues from the Aztec capital of Tenochtitlán, somewhere to the north.  This would make Cerro Culiacán a possible candidate with its many caves.  Some point to the alternate use of the mountain’s name as proof that this is where the Aztecs came from.  The name Teoculhuacan Chicomoxtoc Aztlán is often used instead of Cerro Culiacán.  No one knows when people started to call the mountain this, but it was probably only during the last century, as theories spread about the mountain’s connection to the mythical Aztlán.  There are no records from colonial times or immediately after referring to the cerro by its long indigenous name.  There are scholars who have spent decades of their careers trying to prove the Aztec connection.  One such person is Mexican archaeologist Julio Jorge Celis Polanco.  Celis claims to have identified all seven of the ancient Aztec caves and has named them, corresponding to each Aztec subgroup that supposedly emerged from there. He   even leads tours on the mountain where visitors can explore the caves.  Critics claim that Celis has no proof for any of his claims and that because Cerro Culiacán is an old volcano it is riddled with dozens of caves and not just seven.  The critics believe that he and others are engaging in wishful thinking.

Whether or not the cerro is the original homeland of the Aztecs, as it is a volcano, it is by its very nature assumed by some to be a portal to another world or dimension according to lore, both ancient and modern.  Throughout Mexico volcanoes always seem to have a connection to the paranormal and going back thousands of years they have been seen as passageways from one world to another.  The ancient Mexicans across many cultures believed that volcanoes led to the Underworld, while some modern Mexicans believe that UFOs, legendary creatures and assorted spirits enter and exit volcanoes at will.  In the early days of Spanish settlement, livestock such as cattle and sheep would enter the lava tubes of the mountain and never be seen again, which made people come up with interesting theories as to why.  When people started exploring the caves, then more stories surfaced.  Like the animals, sometimes people would enter and never return.  Other times, people would come back and would have fascinating stories to tell. The first story of a secret underground world comes from the end of the Spanish colonial era, in the first decade of the 1800s.  A young girl looking for a lost sheep went inside one of the caves going deep into Cerro Culiacán and after almost falling off a ledge she came to a gigantic cavern with a large city inside it.  The buildings seemed to sparkle, and the cave had its own source of artificial light that made it seem like daytime inside.  She noticed people in the distance and what appeared to be vehicles.  The story came out many decades later as the family of the shepherd girl kept quiet as they were afraid that the girl would be accused of witchcraft for revealing what she saw.

Stories like the girl and the lost sheep were few and far between until the 1950s when the modern road that leads to the top of this beautiful volcanic mountain was opened to the public.  The cerro became a popular spot for weekend outings and more people started coming to the mountain for day trips or weekend excursions.  A more modern story of a possible underground city at the site dates to the 1970s when a man named Uriel Almanza was exploring deep into one of the many volcanic tubes and reported something like what the young girl saw almost two centuries before.  Almanza did not experience the underground city from a distance, though; he went down into the gigantic cavern and into the city itself.  He described the people as being indigenous in skin color and features and they dressed like ancient Mexicans.  He moved among them and was somehow able to communicate with them.

Uriel Almanza was quoted in a pulp UFO magazine at the time saying, “The passages there are made of a material similar to glass and are the communication channels towards the great spheres where these people wander, all of them very neat with white clothes who appear to be in absolute peace, spreading and stimulating something spiritual. They are superior beings who dominate matter, time and space, enter and leave this hill in the form of a cloud to disappear in an instant and thus link with the cosmos, sea and land.  They have been in existence since the beginning of our time according to what they told me and so they will accompany us until the last of our days.” Another person who supposedly made it to the interior world of Cerro Culiacán was Guanajuato resident Oscar Arredondo. His story was much like the others: He explored one of the deep caves of the mountain, came to a massive cavern, and inside that cavern was a self-sustaining city.  Arredondo stated in an interview, “Artificial sun emanates a greenish hue that helps all living beings keep young and vigorous.  There are large galleries where there are various instruments to monitor what happens on the surface.”  Arredondo also claimed that the people living inside the mountain are not much different from us, and that they are not from outer space as others have said.

One does not have to go inside the many caves of Cerro Culiacán to experience the high strangeness there.  There have been reports going back centuries of a race of little people sighted on the mountain.  Some believe that these sightings go back to the time before the Europeans arrived.  Some modern-day hikers and campers have claimed to have had encounters with elflike beings on the mountain.  Sometimes the beings are alone, but there have been stories of humans coming across groups of these little people dancing or engaging in rituals, even speaking and singing in their own language. Some have considered these elflike beings to be the nefarious Greys of UFO lore while others believe they are the mythical little people called chaneques talked about in Mexico Unexplained episode number 59: https://mexicounexplained.com/alux-chaneque-mexicos-elusive-elves/  Into the 21st Century there have been other bizarre sightings on the mountain.  Hikers and campers have reported seeing a tall, pale-faced man in a black trench coat and black top hat walking on the trails at a distance.  Other people have reported what appeared to be the ghost of an indigenous woman, dressed in traditional clothing, pleading with them in her language, as if lost or in some other kind of distress.  The sighting of the spectral disoriented indigenous woman has also been reported in other parts of Mexico in natural settings. Yet another interesting legend connected to Cerro Culiacán has to do with a historical larger-than-life guerilla fighter from the Mexican War of Independence.  Albino García Ramos was born on a hacienda called Cerro Blanco near Salamanca, Guanajuato on March 8, 1774.  In 1810 he became an insurgent and joined up with Father Miguel Hidalgo’s rebel army when it passed through Salamanca.  García had an interesting way of immobilizing Spanish soldiers.  In all his years on haciendas, he was an expert at the lasso and developed a technique of lassoing his enemies and dragging them behind their own horses.  He did this with incredible speed and dexterity, and impressed friends and foes alike. García soon rose through the ranks of the rebel army and over the course of his stint as a minor rebel leader, he and his small militia would raid settlements loyal to Spain and loot homes and haciendas of the wealthy.  Because of this García amassed a huge treasure.  In the early summer of 1812 Albino García became very ill and had to hide out in the Valle de Santiago to recuperate. While he was trying to recover, he was captured by Spanish royalist forces.  García was taken to the city of Celaya and was shot in its public square on July 8, 1812.  After his death rumors circulated about the insurgent’s fabled treasure.  Although no one knew exactly where, Albino García told a few family members and close confidants that the millions of pesos in gold, silver and jewels were hidden in one of the many caves of Cerro Culiacán.  To this day, no one has found it, or at least no one has admitted to finding it.