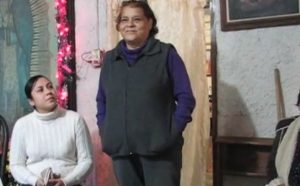 Ermilia Carrasco – known to her friends as “Mila” – considers herself to be an average Mexican grandma.  She lives in a modest home in the Nuevas Colonias district in the city of Monterrey, the capital of the Mexican state of Nuevo Leon and the third largest city in Mexico.  Ermilia has maintained her humble composure in the face of perhaps hundreds of interviews since the late 1990s.  For nearly twenty years the señora’s home has been visited by tens of thousands of people, including documentary filmmakers from as far away as Australia and Japan, who have hoped to catch glimpse of the various miracles said to take place on her humble premises.   The focal point in Mila’s home is a curious image familiar to Catholics around the world.  It’s a standard depiction of the Madonna and Child known to English speakers as Our Lady Help of Christians or to Spanish speakers as Nuestra Señora María Auxiliadora.  In Mexico she is also sometimes called La Virgen de Noche, or the Virgin of the Night.  The image, measuring about eighteen inches across, is a print on sturdy cardboard and is sandwiched between two pieces of glass.  While many Mexicans have similar mass-produced icons in their homes, this one is notorious because the Virgin cries.  Not only does she cry, she cries on a daily basis.  She cries in front of people and on camera.  Those who have witnessed this phenomenon leave the Carrasco home incredibly moved with no worldly explanation to describe what they have witnessed.  Many visitors have also told of other small miracles occurring in the modest house in Monterrey. Ermilia Carrasco received the image now known as the Weeping Virgin, or La Virgen que Llora, from a man named Father Renzo, a member of the Catholic order of Salesians based in Cochabamba, Bolivia.  Father Renzo was in Monterrey in the late 1990s for a conference and while there he gave away dozens of images of Mary Help of Christians to parishioners after a visit to the local church.  The Virgin is the protector and patroness of the Salesian Order and her veneration goes back to the Middle Ages.  In the popular image, the Virgin is holding the Christ Child who has outstretched arms.  Both mother and child are topped with bejeweled golden crowns and their facial features are very soft and northern European.  In fact, the Baby Jesus of this image, with his chubby cheeks and mid-length curly blond hair, looks very similar to the American child actress Shirley Temple.  This depiction of the Virgin has been historically venerated and called upon to ward off non-Christians who would cause harm, specifically Muslim invaders of Europe, and to protect against evil forces that would harm the Church or true Christian believers.  This Marian devotion was particularly important to Father Don Bosco, who was later made a saint by the Catholic Church, who used this Virgin as the cornerstone of the founding of his Salesian Congregation.  The main shrine to María Auxiliadora is thus found in the northern Italian city of Turin, in the basilica there.  The statue in Turin was even given a special canonical coronation by Pope Leo the Thirteenth in 1903.  This Virgin is also venerated in the Eastern Orthodox Church.  The earliest record of devotion in the East dates back to 1030 in Ukraine where she was given credit for helping fend off a barbarian invasion.  In spite of the deep history of this Virgin in Europe and unlike Mexico’s more home-grown Marian apparitions – the Virgin of Guadalupe, the Virgin of Zapopan and the Virgin of San Juan de los Lagos – Mary Help of Christians has very little connection to Mexico.  Although this may be the case, believers affirm that God is speaking through this particular image for a certain very important reason and people should pay attention to what message this European Virgin may have to give to Mexicans. When Carrasco brought home the image from church on that day in 1998 she placed it on the small table set up as a devotional altar in her living room.  Many homes in Mexico, however modest they may be, have a similar set-up:  a small sacred space such as a simple, cloth-covered table up against the wall or in the corner, for family saints, candles and other objects of religious devotion. Within days Mila noticed tears coming out of the eyes of the Virgin.  The tears rolled right down the image without causing any buckling or other harm to the paper surface.  She showed her family and then word spread throughout the neighborhood of what people had immediately branded a miracle.  To protect the image from excessive handling, Mila encased the icon in glass, which seemed to have no effect on the crying phenomenon.  The Virgin continued to weep, every single day.  Within weeks the story spread beyond her family, friends and neighborhood and people started to show up at the Carrasco’s doorstep from other parts of Mexico hoping to be able to ask the Virgin for assistance or intercession.  As this was still her family home, with all of the regular family activities going on inside of it, Mila had created a handwritten sign to post on her front door to announce hours that her living room would be open to the curious.  This is the system she uses to this day, with a rosary prayed on the premises every day at 3:00 in the afternoon.  Since the late 1990s, though, the living room which was the destination of a few pilgrims per day has been transformed into a full-fledged shrine with statues, candles and makeshift pews in which the devout and the curious can sit in quiet contemplation. Not only has the scope of the shrine increased over time, so have the miracles associated with the Carrasco’s former living room.  Alongside the main table on which the crying image sits, there stands a nearly life-size plaster statue of Our Lady Help of Christians which was given to the Carrasco family, like so many of the other objects in the shrine, by a devout person who was helped by his visit to the home.  Within weeks of the statue’s installation, it also began to cry, but the tears were not a salty liquid, as are the tears coming out of the original image.  The statue’s tears are an oily substance, and they only appear infrequently, not on a daily basis like the icon.  Also, Mila received a wooden rosary from a pilgrim as a token of thanks which also seems to be exhibiting unusual properties.  The rosary was brought back from Rome in 2005 and was said to have been blessed by Pope John Paul the Second.  During one of her 3:00 rosary prayer sessions, the rosary became sticky and then oily and began to give off a fragrant smell of roses.  Since then, when handled, the rosary has also been seen to “cry”, even in front of cameras.  The smell associated with the rosary has also been said to fill the shrine even when no flowers are present.  Many visitors do bring flowers to the shrine which is part of another curious phenomenon in the Carrasco home.  One day, while cleaning up the flower petals on the floor, a woman noticed what appeared to be an image of the Virgin of Guadalupe on one of the petals.  Over the course of the next few weeks more images appeared on other flowers, too, notably the face of Christ and other likenesses of the Virgin of Guadalupe.  A face of Christ even appeared on a tissue used to wipe away the tears of the main icon.  Mila has saved all of these items and has displayed them for the camera crews and the curious.  Another unusual religious manifestation that happened in the Carrasco home occurred on the cement floor of the shrine itself.  When cleaning the floor with a mop one day, sometime in the mid-2000s, Mila noticed a faint outline image of the Virgin of Guadalupe appearing when the floor was wet.  This, too, has been demonstrated repeatedly and has been recorded on film.

The various phenomena present in the Carrasco home has not only attracted pilgrims but has drawn the attention of paranormal researchers and debunkers.  The image of the crying Virgin between the glass can be picked up and turned around and examined.  No pipes or ducts for water are present to induce the tears.  The other things happening in the home also seem to defy explanation.  A paranormal research team from Australia speculated that there was something different about the location, that a paranormal phenomenon specific to the Carrasco’s living room was causing all of the religious manifestations.  The film crew making a documentary for Australian television even recorded noises and movement inside the shrine while there were no people present.  Could all of the happenings in the Carrasco living room be the product of a spirit of some sort?  What of the original icon?  Have other people who have received similar icons from the Bolivian priest in the late 1990s been experiencing similar things happening in their homes?  The answer to this is, “No.”  It is curious to note that the town of Cochabamba, Bolivia – where the icon hails from – is known for its own similar curious religious phenomena.  Cochabamba is not only famous for having the tallest statue of Christ in the world – called Cristo del la Concordia, or The Christ of Peace – it is home to a weeping statue of Jesus in its main cathedral which also is said to emit blood.  Cochabamba has also been home to a rash of stigmatists, those who suffer from the stigmata, or bleed from locations on the body corresponding to the wounds of Christ.  Has the Cochabamba connection been overlooked by investigators in this case in Monterrey? What does the Catholic Church think of what is going on in Ermilia Carrasco’s former living room?  The Church is taking this all very seriously.  There are around 400 cases around the world of images of Mary in various forms – icons, statues, etc. – shedding tears or bleeding.  Many cases are swiftly debunked as hoaxes or explained away as the result of natural phenomena, such as accumulations of atmospheric moisture on statues.  The Vatican has assigned a local priest to follow the case, Father Luis Eugenio Espinoza.  Espinoza, who holds a doctorate in theology from the University of Louvain in Belgium and who is a professor at the University of Monterrey, urges caution when investigating alleged miraculous phenomenon.  In an April 2016 interview with the Mexican publication La Crónica, Father Espinoza explained that the Church will wait several decades, usually 2 full generations, before it declares something like what is happening in Monterrey a miracle.  In the article Espinoza explained, “It is the potential failure that we have when we speak of a miracle and then we see that other factors intervene.  We must know how to separate the supernatural, the inexplicable from the miraculous.  The true miracle always has as its purpose to bring the faithful to the Church and to preach with good.”

For Monterrey resident Ivonne Navarro there is no doubt that the Virgin present in the Carrasco home has heard her prayers.  On her visit to the shrine she asked for her sister to hear from her nephew again.  Her sister hadn’t seen her son in 20 years and knew no news about him.  While in Ivonne’s presence, the Virgin icon shed tears.  When Ivonne returned home later that day, her daughter greeted her at the door to tell her the news that her sister finally had made contact with her son, who appeared at her home earlier that day.  Whether a paranormal phenomenon, the product of restless spirits or a real dose of the divine, the Weeping Virgin of Monterrey has filled untold thousands with hope and continues to inspire a sense of wonder.

One thought on “The Weeping Virgin of Monterrey”