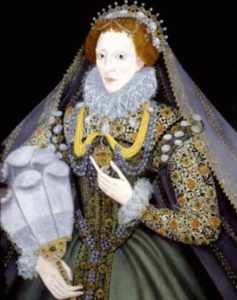 In March of 1576 Queen Elizabeth the First called on the humble home of one of her most unusual and esteemed subjects.  With her entire Privy Council in tow, the dour queen thought it fitting to travel to the village of Mortlake to visit this man on the occasion of the death of his wife.  This esteemed subject was none other than John Dee, who had become famous in Britain and throughout the Continent, for his knowledge of philosophy, astronomy, mathematics, ancient languages and a whole host of more esoteric subjects.  Dee was almost 50 at the time and this was his second wife.  History does not record her name, but she had been married to Dee for less than two years.  Queen Elizabeth refused Dee’s entreaties to enter his home, and Dee struggled to make best of an awkward situation.  To entertain his queen while she waited outside, John Dee brought out a curious artifact for her examination.  It was an unusual mirror, round and measuring about nine inches across, made of highly polished obsidian, or volcanic glass.  The mirror was given to Dee by Sir William Pickering, who was England’s ambassador to France.  It supposedly was part of a shipment of items plundered from the Aztec Empire and sent back to Spain by the conquistador Hernán Cortés himself.  Instead of ending up in Spain, though, French pirates attacked the ship carrying the plundered Aztec goods.  The volcanic glass mirror ended up in France and was given to Ambassador Pickering.  Pickering gave the curious Mexican mirror to Dee when he was traveling through Europe just a few years before.  The mirror was so fine that some archaeologists believe that it came from the royal palace in the Aztec capital of Tenochtitlan and may have belonged to Emperor Montezuma or one of his chief priests.  Recent tests on the mirror using trace element analysis show that the mineral structure of Dee’s mirror points to an obsidian source found near Pachuca in central Mexico.  The mirror is currently in the collection of the British Museum.  But, what did Queen Elizabeth think of this artifact?  In Dee’s own diary he writes that he demonstrated the mirror “to her Majesty’s great contentment and delight.”  After the queen expressed her condolences to Dee, she handed the mirror back to him and left him to his grief. Who was John Dee and what role did this Aztec mirror play in his life and work?  Dee was born in Tower Ward, the easternmost section of the City of London, on July 13, 1527.  His father was from Wales and held a position in the court of King Henry the Eighth, as “Gentleman Sewer,” responsible for the acquisition and care of valuable fabrics for the royal household.  Dee’s genius and curiosity about the world around him shone through at a very young age.  By 15 years old he was already admitted to St. John’s College, Cambridge.  There he studied Arithmetic, Astronomy, Geometry, Greek, Latin and Philosophy.  In his spare time, Dee dabbled in alchemy and magic and taught himself Hebrew in order to study kabbalistic texts.  By the time he left Cambridge in 1546 before his 19th birthday Dee had earned both BA and MA degrees.  Upon graduation he left England for the Continent, traveling to France, the German kingdoms and the Low Countries, primarily.  Constantly on a quest for knowledge, Dee was interested in what we would call today, a “theory of everything,” that would explain the very underpinnings and inner workings of the entire Universe.  While abroad he met up with the leading European intellects at the time, and Dee began to acquire curious artifacts and volumes of books.  His massive collection of books and assorted manuscripts and maps would later become part of one of the most impressive libraries that England has ever seen.  It was during his travels in Europe when John Dee became the owner of the famous Aztec black obsidian mirror which is now at the British Museum.

Dee would use this mirror for scrying.  According to Wikipedia, “scrying” is defined as, “the practice of looking into a suitable medium in the hope of detecting significant messages or visions.”  Merriam-Webster defines it simply as, “crystal gazing or divination.”  John Dee along with assistant Edward Kelley would use various reflective surfaces to scry for long periods of time, and scrying sessions could last up to eight hours.  They claimed, and documented, that their staring into these reflective surfaces put them in contact with supernatural beings who had specific names and distinct personalities.  Even with the recent Protestant Reformation, the religious environment of 16th Century England was still a bit tenuous and because of this Dee did not refer to these beings as “entities” or “spirits” but as “angels.”  Dee was often accused of witchcraft and “conjuring” and he was arrested and questioned several times throughout his life and brought up on charges related to his dabbling in the more esoteric arts.  He got the attention of the notables of England, including Queen Elizabeth herself, who even consulted John Dee to pick the perfect day, astrologically speaking, for her coronation, to ensure a long and fruitful reign.  Dee outlived the queen, but Elizabeth’s reign lasted 44 years and saw a very prosperous and expansionistic time for England, which only added to Dee’s credibility.  While never receiving an official position at court, Dee was a trusted advisor of the queen.  Many credit Dee with the whole concept of the British Empire, as he encouraged English expansion, especially into North America, and many navigators consulted with him when planning their expeditions.  Known as a polymath and one of the original “Renaissance Men,” Dee’s wide interests were based on his need to describe fully the world around him.  In a slightly more relaxed environment of Protestantism in Elizabethan England, Dee’s studies often ventured off into what we would consider “the occult” today.  That included using the Aztec mirror to contact spirits and to see into the future.  The alleged “angels” who contacted Dee influenced him and because Dee had the ear of the queen, they thus influenced England’s future direction as a world power.

Perhaps unknown to John Dee, the Aztecs themselves practiced a form of scrying with mirrors made of polished volcanic glass, including that obsidian mirror in his possession.  The Aztecs called obsidian itztli, and it was a precious commodity only found in a few places throughout their vast empire.  Obsidian mirrors, along with ceramic flutes, were associated with the Aztec god Tezcatlipoca, whose very name translates to “Smoking Mirror.”  Tezcatlipoca is one of the main gods of the ancient Aztecs and was also an important deity to other indigenous groups living in central Mexico in pre-Hispanic times.  The “Smoking Mirror” was the patron god not only of the Aztec elites but of other noble families throughout ancient Mexico, notably the royal houses of Tlaxcala, Chalco and Texcoco.  In many ancient Mesoamerican legends, Tezcatlipoca is seen as the eternal rival to the feathered serpent god Quetzalcoatl.  For more information on Quetzalcoatl, please see Mexico Unexplained Episode Number 100. https://mexicounexplained.com//quetzalcoatl-man-myth-god/   Tezcatlipoca was often associated with the night sky, discord, strife, jaguars, sorcery, predicting the future and, not surprisingly, obsidian.  In fact, the famous illustrated Aztec bark-paper book, the Codex Borgia, shows the god with one of his feet replaced by a circular mirror that looks exactly like the one that ended up in the hands of John Dee.  In Aztec lore, before the coming of the Spanish, fishermen discovered a strange waterfowl in Lake Texcoco with a round obsidian mirror on its head.  In the mirror one could see the night sky along with images of strange men carrying unusual weapons alongside what was interpreted to be gigantic deer.  The discovery of the bird with the mirror on its head was considered a bad sign by Emperor Montezuma and was said to foretell the arrival of the Europeans and the conquest of the Aztecs.  For more information about the appearance of this strange bird, please see Mexico Unexplained Episode 68 titled, “The 8 Omens of Montezuma and the End of the Aztec Empire.”  https://mexicounexplained.com//8-omens-montezuma-end-aztec-empire/   There are only 16 of these obsidian mirrors known in modern times, all in museums or private collections.  Most come from central Mexico, but one was found in Michoacán and another one in Oaxaca.  These polished volcanic glass discs, called tezcatl in Nahuatl, must have been exceedingly rare and most likely were reserved for elite ritual use.  The Nahuatl word for obsidian, itztli, was combined with the word popolhuia, which means, “to cast a spell,” to make the word, itzpopolhuia, which means, “to predict,” in English.  It’s not surprising then that the Aztecs prized polished obsidian for its use in predicting the future. It’s more than a bit uncanny that the ancient Mexicans used the round obsidian mirrors much as the Englishman John Dee did decades after the Spanish eradicated the worship of Tezcatlipoca from Mexico.  During the month of May the Aztecs had a festival dedicated to the “Smoking Mirror” god which took a full year to prepare for.  The high priest of Tezcatlipoca, called the Huitznahuac Teohua Omacatl, resided in the main Temple of Tezcatlipoca located in the civic-ceremonial center of the Aztec capital.  The high priest, together with the minor priests, called the Calmeca Teteuctin, planned the elaborate festivities celebrated throughout the Empire to honor Tezcatlipoca.  The most important part of the planning included the selection of a young man among the elite class of Tenochtitlan to serve as what was called the Ixiptla.  This honored individual would live like the god Tezcatlipoca for one year and even dress up to look like him.  At the end of the May festival, the priests would sacrifice the Ixiptla at the main temple and the cycle would continue the next year.  When priests performed official duties in service to Tezcatlipoca, they would paint themselves black with charcoal to look like obsidian.  They would also wear a loincloth made of elaborate decorated paper and donned a headdress made of turkey feathers.  Part of this priestly “uniform” included carrying small obsidian mirrors or wearing volcanic glass discs as pendants.  During the coronation ceremonies of the Aztec emperors, one of the rituals was for the newly crowned emperor to wear the regalia of the Tezcatlipoca priests for one day, including the black charcoal body paint, so that the emperor would take on the powers of this important god.  During any ritual or ceremony dedicated to Tezcatlipoca, the priests would make ample use of the obsidian mirrors, and as mentioned earlier, because of its size and fineness, John Dee’s Mexican mirror was most likely used by the priests at the main temple to Tezcatlipoca in the Aztec capital.  The priests used the mirrors’ bright reflective powers to gaze into other times and other worlds without passing through them.  They also used the mirrors much as John Dee would use his, by scrying, or sitting for extended periods of time and staring into them.  Like Dee, the Aztec priests used the mirrors to communicate with entities in other realms and times.  Also like Dee, the Aztecs recorded what they saw reflected back to them in the mirrors and compiled extensive almanacs.  They also made lists of predictions and offered suggestions to the Aztec emperor for future undertakings.  In this way, the mirrors were used as political tools to forge the destiny of the Empire.

It seems very strange that one of these highly prized tools of Aztec divination would end up in the hands of one of the most notorious and learned practitioners of the occult of Elizabethan England.  What spirits and visions came out of John Dee’s “Magical Mexican Mirror,” and to what extent they influenced the fate of England and the rest of the Western world, we may never know.